Controlling Mould Spread – How difficult is it? 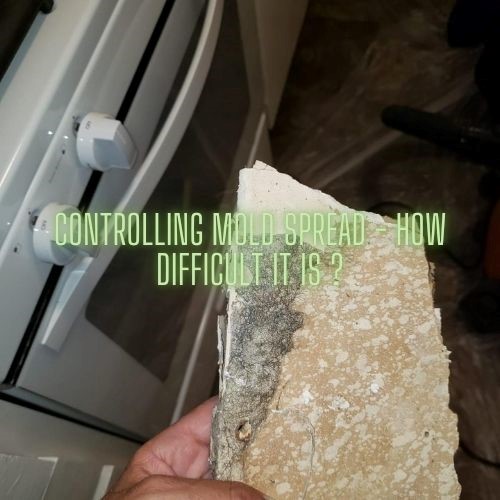 Controlling Mould Spread – How difficult is it?

Controlling the spread of mould is a critical task. Mould includes toxins in the form of chemicals and proteins. As a result, mould control should be performed as soon as feasible. The following post will go into mould control and how difficult it is to stop it from spreading. Biocide, air currents, and pets will also be covered. After you’ve resolved these issues, you’ll be ready to face the next challenge: mould removal.

Moisture control is essential whether your home is an old barn or new construction. Mould growth in buildings and residences is primarily caused by excessive moisture. Mould growth can thrive in settings of poor airflow and inadequate ventilation. There are, however, basic precautions that homeowners and business owners can take to reduce mould growth indoors. Mould infestations will just reoccur if effective moisture control is not implemented.

Mould can be found indoors and outdoors and can develop on almost any organic object. It is capable of infecting carpet, paper, insulation, and foods. Excess moisture can encourage mould growth and must be avoided. Furthermore, testing is frequently done for legal or insurance reasons and is recommended by a professional. To properly repair a home, it is critical to understand the limitations of these toxins.

If there is excessive moisture in your home, you should consider installing a dehumidifier or air conditioner. A home humidity metre can assist you in determining whether the humidity in your home is too high or too low and whether it can be addressed with a few simple measures. Look for leaks behind sinks, toilets, and shower curtains. Also, make sure your clothes dryer and exhaust fan are vented outside.

Mould can produce chemicals and proteins that are toxic to humans. If you have mould problems, you should think about using a biocide. This substance kills living organisms by inhibiting their growth, such as mould spores. A professional cleaner will have the necessary tools and safety equipment. They will also understand the most effective biocide and how to remove mould safely and effectively.

While using a biocide during a mould remediation process is not recommended regularly, it may be necessary in some cases. This includes sewage spills, floods, and situations that have weakened people’s immune systems. Biocide should not be used on porous surfaces and only in locations where mould development occurs. While it is impossible to sterilise the entire area, biocides can be used safely and effectively in mould-infested areas.

Although the majority of biocides are water-based, their active ingredients evaporate quickly. This means they do not truly kill the mould spores, which will linger on damp surfaces. Even if the biocide kills the mould, the spores will settle and multiply in the moisture. Most biocides are hazardous and should not be used inside. Mould-resisting products have been developed for use in high-risk environments.

Excess moisture intrusion is a primary cause of mould formation, which can be produced by various factors such as inefficient maintenance, design flaws, and tenant activities. While floods, roof leaks, and drainage concerns are obvious sources of moisture, there are less visible reasons for moisture infiltration, such as temperature gradients that enable water vapour to condense on surfaces within the building. These conditions can encourage the growth of mould, which can then spread.

Mould is not hazardous in a regulated setting but highly destructive. Mould flourishes on outside surfaces such as uninsulated walls during the winter when moisture is abundant. Mould spores thrive in poorly insulated rooms and closets along exterior walls. Furthermore, these conditions are colder than the indoor air, which allows mould to develop. Controlling mould spread with air currents can thus be an essential aspect of preventing mould growth.

Managing the signs of pet mould exposure is critical for your pet’s health. Although mould exposure may appear to be a minor concern, it can cause serious health consequences if left ignored. Sneezing, coughing, and gastrointestinal distress are common symptoms of mould exposure in pets. They may also lose their appetite or have other negative consequences. While pets’ immune systems are often compromised, it is critical to keep mould-free areas clean.

The first step in mould removal is to keep the house clean. Having fresh air in the house is critical to keeping your pet calm. Another important aspect of keeping your home clean is to keep your pet’s food and water in properly sealed containers. This prevents mould-causing spores from spreading throughout the house. To avoid spreading mould spores, keep the bedding dry. Make sure to also wash your pet’s bedding in hot water.

Some moulds are poisonous and can cause major health problems. Toxic moulds can harm the liver and cells. Affected pets may exhibit respiratory difficulties, skin irritation, and odour. If the symptoms persist, your veterinarian may urge you to isolate your pet to prevent the mould from spreading. To avoid mould exposure and prevent symptoms from intensifying, make arrangements for pet care ahead of time.

When utilised correctly, ozone can be incredibly successful in combating the spread of mould in buildings. Ozone can reach places where humans cannot, killing missing spores. Mould spores are invisible to humans, and ten thousand spores fit on the head of a pin.

Although ozone is an effective antibiotic treatment, it does pose some hazards, notably to people’s lungs. Ozone treatment for mould will only assist to lower the amount of mould in a certain region. It will not allow you to clean up mould spores unless you first remove the source of moisture.

If you’re looking for a quick and effective mould and water damage treatment, you might want to try vinegar and tea tree oil. Mould and its roots are both effectively killed by vinegar and baking soda. Allow these two chemicals to stay on the mould for a few hours before wiping it away. A baking soda and water solution is also a possibility. If you’re concerned about the effects of vinegar, use a tiny amount and wait for the mixture to dry before wiping the area clean.

When you’ve opted to clear up mould with vinegar and water, start by soaking heavy-duty sponges in a mix of one part vinegar and two parts water. While soaking the wall may take many hours, eradicating stubborn mould areas is well worth it. To kill any leftover mould, combine vinegar with the solution. After thoroughly cleaning the area, use a high-quality air-purifying solution or thoroughly dry the area.

Cleaning the outside of your property is another technique for mould removal. If the mould has spread to your siding or deck, apply a cleaning solution containing hydrogen peroxide. Because hydrogen peroxide does not harm landscaping, it is safe to use on the siding.

If you require the services of a mould remediation contractor, you should thoroughly research them before hiring them. Request references and read client testimonials to determine whether or not they were satisfied with their work. You can also look at the company’s website to see how satisfied previous customers were with the service. You should also hire a contractor who can advise you on avoiding future mould problems. It is always better to rely on recommendations than to risk a mould infestation.

When hiring a mould removal contractor, ensure they are certified and utilise proper equipment. Because not all equipment is good at eliminating mould, selecting a business that employs mould-fighting equipment to keep the disease at bay is critical. Furthermore, you should select a business that uses HEPA-filtered goods to ensure that the mould has been eliminated from your property.

When hiring a mould removal contractor, inquire about their certifications and expertise. A company that has been in business for a long time should have the necessary tools and training to complete the task securely. Mold removal contractors should be knowledgeable about all areas of the mould cleanup, from the source of the problem to the extent to which it has spread.

The post Controlling Mold Spread – How difficult It Is? appeared first on https://werbloggers.com

The post Controlling Mould Spread – How difficult is it? appeared first on https://gqcentral.co.uk