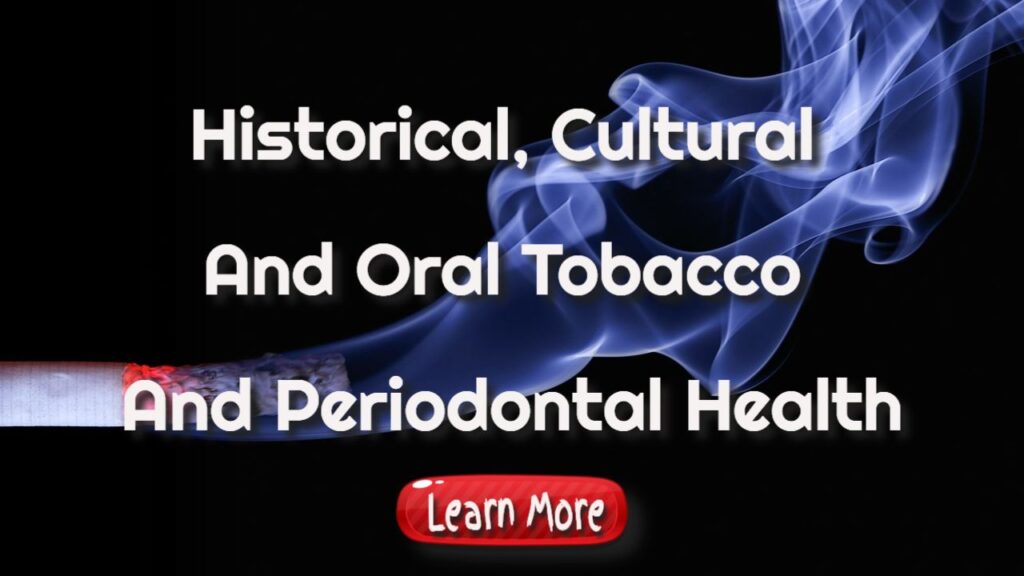 Historical, Cultural, And Oral Tobacco And Periodontal Health: Tobacco has always been popular, and its usage is expanding despite grave health hazards.

Even though much is known about its downsides, Tobacco is farmed, developed, advertised, marketed, and sold to get a large piece of the financial pie.

It is an essential source of revenue for the government through excise taxes.

Many studies in numerous nations have shown the potentially harmful effects of its ingestion on practically all living systems, regardless of form.

Newspaper articles are frequently written to raise awareness of the consequences.

The print and electronic media have a dual purpose: on the one hand, they help promote and popularize tobacco/gutkha and similar items, while on the other, they print and highlight the health risks.

According to research, over 70% of alcoholics are chronic smokers, compared to 10% of the general population. Similarly, smokers are 1.3 times more likely than nonsmokers to use alcohol.

It is unknown where, in what form, and how these dangerous plant leaves became popular and addicted to humanity.

Much is now known, but it is also vital to understand Tobacco’s history.

Tobacco is extracted from the leaves of Nicotiana, a nightshade plant native to North and South America.

According to archaeological findings, Tobacco was utilized in holy and religious events by the Maya people of Central America as early as the first century BC.

When the Mayan society migrated from the southern Americas between 470 and 630 AD, Tobacco spread as far north as the Mississippi Valley.

Native American shamans developed the use of Tobacco in sacred rites. At the same time, doctors began to use Tobacco in various forms to treat disorders such as asthma, earaches, intestinal difficulties, fevers, sore eyes, depression, insect bites, burns, etc.

When Columbus and his successors began to chronicle tobacco use in other nations, Indians began to use Tobacco in pipes, cigars, and snuff.

Tobacco is being utilized in many forms in various parts of the world. Tobacco is farmed for local consumption and farmers and government treasuries (excise taxes, levies, etc.).

China, the United States, the former Soviet republics, India, and Brazil are the largest Tobacco producing and consuming countries.

It is incorporated into existing traditional customs throughout South and Southeast Asia in the form of betel tobacco (paan).

The tobacco industry employs thousands of people and generates significant cash for the advertising sector, the written and electronic media, and the government (for revenge purposes and as a source of foreign exchange).

Since its introduction in South Asian countries, Tobacco has been used in a variety of forms, including hukka (water pipe), chilam (clay pipe), cigarettes, and rolled Tobacco in the form of bidees chchuta (backward smoking). So on, whereas non-smoking or chewing Tobacco includes snuff/naswar (roasted and finely powdered for inhalation), mawa, qiwam, and gutkha, Tobacco is combined with cloves and dipped into the mouth cavity in Indonesia.

Paan is popular among men in central and western India but not among women in these regions.

In Bangladesh, whether educated or uneducated, women drink more paan, preferably with cigarettes.

According to a survey, Bangladeshi women who smoke say smoking helps them concentrate on their work.

According to the survey, a considerable percentage of the population believes that paan strengthens teeth and eliminates bad breath.

Several factors influence tobacco use. Despite increased public knowledge of the hazards connected with tobacco use and educational programs aimed at discouraging tobacco use, both cigarettes and alcohol are regarded as substantial risk factors for various health outcomes linked with long-term use of either product.

Culture directly or indirectly influences tobacco usage since some people who have an inherited component later get addicted to nicotine.

Boys observe their grandfathers or fathers smoking and believe it is a necessary element of manhood.

Smoking is regarded as a natural aspect of manhood and a symbol of masculine authority. Smoking is considered harmful for women in any community, but it is acceptable for males.

The guy is in charge, and smoking is a sign of that power; if a woman smokes, it is viewed as a threat to the man and his manhood.

A woman who smokes is also considered ethically and sexually immoral.

Smoking and chewing paan can be part of a social gathering that celebrates the hospitality and strengthens connections.

The Havana cigar is smoked at social gatherings and is a status symbol.

Until around a decade ago, the primary outlets for advertising and marketing cigarettes were cinema and print media.

A change in the legislation has made it illegal to advertise smoking in public places, and print media is being used to spread this message.

Male stars in Indian cinema are still depicted smoking stylishly, which affects the mindset of the younger generation, who later want to adopt and emulate this practice.

Gutkha is a branded product offered in India in brightly colored, eye-catching bags.

As a result, newer generations regard it as current, acceptable, and fashionable, so it is consumed.

Mothers of Asian ancestry in the United Kingdom criticized the media for exposing their children to gunka.

This impacts schoolchildren’s sensitive minds, as one study found that many children spend their pocket money on gunkha.

Tobacco is being popularized as a dental care product by some corporations by putting it into toothpaste or tooth powders.

Even though the law has been updated to prohibit the use of Tobacco in dental care products, some producers continue to utilize Tobacco as an ingredient in tooth powders without declaring the ingredients on the box.

According to Chaudhury’s questionnaire survey, 6 percent to 68 percent of 13- to 15-year-olds use tobacco products.

Split Tobacco was popularized in the United States by sports figures. 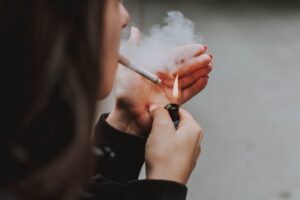 Tobacco has 2550 identified chemicals, while tobacco smoke contains over 4000.

Tobacco contains at least 43 carcinogens, including nicotine and nitrosamines and alpha-emitting radionuclides such as polonium 210.
Tobacco smoke contains carbon monoxide, thiocyanate, herbicide, fungicide, pesticide residues, tars, and various other chemicals that promote disease and impair the body’s defenses and functions.

The main negative consequence of smoking is its immunosuppressive effect on the host, impairs host-parasite interactions.

Whether inhaled, snorted, sucked, or chewed, tobacco usage has been demonstrated to be harmful to one’s health and addictive.

Tobacco users suffer from the three Ds: Death, Disease, and Disability, according to scientists.

Many of our body’s systems are interconnected, and the use of such a substance, which can jeopardize our health, impacts many of these internal functions.

Tar, nicotine, and nitrosamines, the main compounds in Tobacco, are potentially associated with mouth cancer worldwide.

Among developed countries, smoking is linked to more than 85% of all cancer deaths in men. It is estimated that smoking causes 40-45 percent of all malignancies and 90-95 percent of all lung cancers.

Many other diseases, such as chronic obstructive pulmonary disease (COPD), kill 75 percent of adults aged 35 to 70. Pipe smoking has been linked to lip cancer in numerous clinical investigations.

While smokeless Tobacco is widespread, mouth cancer may account for more than one-third of all cancers.

Adolescent smoking is on the rise in India, with rates ranging from 19.7 percent to 34.5 percent.

Despite increased public awareness of the risks associated with tobacco use and educational programs aimed at discouraging tobacco use, cigarettes and alcohol are both regarded as significant risk factors for various health consequences associated with long-term and excessive use of either product.

Smoking is well acknowledged to be a significant risk factor for cardiovascular disease, COPD, and several malignancies. Consumption of such items, which can be hazardous to one’s health, disrupts the functions of numerous systems.

Smokers have a distinct color shift of exposed mucosal surfaces caused by melanin accumulation in the mucosal basal cell layer.

The association of a smoker’s melanosis (dark brown foci) and inflammatory alterations caused by heat, smoke, and inhalation with exogenous pigment consumption has not been demonstrated.

White keratosis patches caused by Tobacco are widespread among smokers.

Chronic smokers are also susceptible to nicotine stomatitis (smoker’s palate). Verrucous Ackerman carcinoma is a type of squamous cell carcinoma linked to the use of smokeless Tobacco.

Tobacco and tobacco products are widely linked to various reversible and irreversible oral and systemic disorders and their symptoms.

Tobacco usage in both sexes undoubtedly has familial or cultural repercussions.

Much effort has gone into producing, publicizing, and popularizing Tobacco. Government and private attempts to prevent tobacco smoking, on the other hand, have proved ineffective.

The potential health risks of Tobacco are highlighted in smoking cessation therapy.

Alcohol and Tobacco are frequently drunk together, and scientific study backs up the widely held belief that “smokers drink and drinkers smoke.”

Smoking has been recognized as one of the most important predictors of periodontal therapeutic response.

In implant patients, smoking is regarded as a substantial risk factor.

Wound healing takes longer in smokers than in nonsmokers.

Several studies indicate that smokers do not respond well to maintenance therapy compared to nonsmokers.